A masterclass by Salaam Fayyad

First thing first, a very short update about my life: I live in the Netherlands now, in the Hague. You can imagine how great it is to live in such an international city, one of those you always here about in the news, when there is an important diplomatic meeting! Well, I'm loving it. Also, I've started a Master in International Relations and Diplomacy, and I find it so interesting! Perhaps I'll tell you more about it in the next posts, let's get to what I wanted to talk to you about today.

A couple of days ago I went all the way to Tilburg (yes, this is a small country, but let me tell you...trains are horrible! So, to get from Leiden - where I had classes - to Tilburg took 1 hour and 40 minutes, 3 trains and lots of running) to attend a masterclass taught by Salaam Fayyad 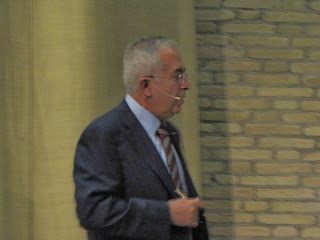 Who is Mr Fayyad? Former president of the Palestinian National Authority (until June 2013), he has a PhD from the University of Texas and worked at the IMF and the Arab Bank until he became Arafat's Finance Minister. I got this info from Wikipedia and you can read more about his life there if you want...interesting career!

The title of the class was "Justice and Power". I'm following a course on conflict resolution at the moment, and exactly two days before the lecture we had a seminar on power. What a great coincidence! It really got me thinking about whether justice and power can go hand in hand: can they respect each other's role? And then Salaam Fayyad said something that really stuck with me: "Justice without power is inefficient, power without justice is absolutism". So, it seems like for him they can, and actually they have to, go together. Coming from a country like Italy, where too often justice is slave to power, I couldn't help but being doubtful, as much as Mr Fayyad's statement does seem correct.

He did, however, solve some of my doubts later on during the lecture. He made it very clear that, in his opinion, any system, where both power and justice are present, needs to have frequent "checks and balances". People don't always behave "well", you can't just trust a small number of individuals to hold justice in every occasion, so you need a system that checks on their behaviour regularly and that balances out whatever injustice there is. It might seem like a really obvious argument, but I can't say that it is followed in many places. However democratic you might thing Italy to be, it certainly does not have enough checks on the behaviour of legislators in particular, but maybe also of magistrates (I say "maybe" cause I actually don't know much about it...I should get informed!). There is a politician, in Italy, (Fabrizio Barca) that devised a system of checks for parties that I strongly support, but I guess I'll have to talk about it another time... 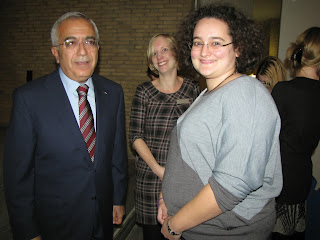 This is me with Fayyad, at the end of the lecture. Yes, I look like an idiot (how could I not, next to such an important person?) and yes, the woman behind us seems like she wants to kill me. Scary!

Going back to what Salaam Fayyad said, he stressed the idea that there are, indeed, certain universal values, and that one of them is justice. He argued that thinkers have agreed on this for centuries, millennia even: Plato believed that a "just" society works better than an "unjust" one, because it works in harmony. In Fayyad's opinion, unjust laws are those that degrade human personality, the importance of which is a value shared throughout the world. In this respect, he mentioned the sense of oppression that comes up when we feel like we are obliged to give up a bit of our personality. In particular, he gave the example of the way we dress (I think he didn't talk about a particular sex, but my mind immediately went to women and their freedom to dress however they like). He said that it is not oppression when a person conforms to certain dressing norms willingly, but it is when (s)he feels like (s)he has to dress in a certain way in order to conform with what it is expected of him/her. A state has to correct the oppression, where there is one.

About this last example, I thought about Muslim women (probably I'm not very imaginative). When can we be sure that a certain woman dresses modestly (wears hijab) because she actually wants to, she feels like that's the best way to express her personality, rather than when she has heard so many times that she has to dress in that way, and now she does it cause that's what she is expected to do? I have a profound respect for Islam and Muslim women, I know many of them that wear hijab and I truly believe that it is their will to do so, but not for all Muslim women around the world the line is so clear. How can a state decide when it is oppression, and when it is not? I asked Salaam Fayyad this question but he didn't really answer, I think he felt like he didn't have enough time (the coordinator kept saying we were reaching the end of the lecture).

Another interesting idea that came up during the masterclass was that history has shown that no big change was brought about in a short period of time: it took three revolutions to bring democracy in France, and almost a whole century. How can we expect, therefore, the countries that have been through the Arab Spring to be democratic and just right away? Perhaps we can give them time, and see where the change goes.

Finally, he encouraged us to be optimistic and, in a way, idealistic. He believes, and I agree, that, whereas realism works on the short term, idealism works on the long term. True, at some level you need a bit of realism, but that doesn't mean you can be idealistic in general. So, for example, we can see the state of Palestine even before the world recognises it, and we can work to create a just society there, so that when it does become a recognised state, much of the work will have already been done. In sha'Allah ;)

Thats all for today, sorry for the long post but the masterclass was really inspiring!

P.S.= in the end me and my friend found out that he had been invited to a small reception in a café in the university, so we sneaked in. Was really cool to stop for a drink (well, water for me) with Salaam Fayyad! He seemed like such a nice man. 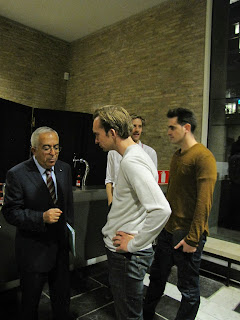 A drink with the former President of the Palestinian National Authority