A day in Amsterdam

As I mentioned in my last post, I live in the Netherlands at the moment. I study in Leiden, a small town (a bit more than 100.000 inhabitants, according to Wikipedia) with the oldest university of the country (even the King studied there!). However, I live in the Hague, which is much bigger and, as you probably know, is the site of the International Criminal Court and, with it, of several international organizations.

One of the great things about living in the Hague is that it's just an hour away from Amsterdam - a city that I've always loved. So today I'd like to talk to you about what you can do in Amsterdam. Yes, I am gonna talk about the red light district and the coffee shops, but first I'd like to make the point that there are other things to see! ;)

Nevertheless, it is a rather small city compared to many other European capitals, so you might be able to see all the most important stuff in two days max. A couple of weeks ago a friend from Italy came to visit me and we spent a day in Amsterdam, and that was enough to get a good feeling of what the city has to offer.

First, my favourite thing: Van Gogh's museum. I visited this a few years ago and I haven't gone yet, since I moved here, but it's definitely on my to-do list for the next weeks! I've always been very fascinated by impressionism and the artistic movements around it (if I'm correct, Van Gogh can hardly be defined "impressionist" in the proper sense of the word), and he is surely one of my favourite painters. The museum is not far from the city centre (it's near the Vondelpark...I'd say it takes half an hour max to walk there from the central station). It is slightly expensive (15 euros), but I can assure you it's worth it!
You can get tickets online here, which could save you a long queue! https://tickets.vangoghmuseum.nl/activity 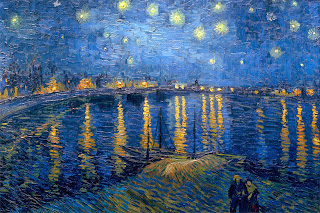 One of my favourite Van Gogh's paintings

Another museum that could be worth a visit is the one dedicated to Anna Frank. This is very near the city centre, the admission is cheaper and I'm sure it will be very interesting! Yes, you guess it, I've never been there. I'm sure I'll go soon...I don't really know why, I've never felt like it. I guess we hear so many things about Anna Frank that you kinda get into the feeling that you know everything about her story, which obviously can't be true.
Anyway, for any more detailed info, this is where to look: http://www.annefrank.org/en/Museum/Practical-information/Opening-hours-prices-and-location1/

Now, when I go to other cities what I like to do is spend the morning doing something intellectually "important", then leave the afternoon for more relaxing stuff, something that generally involves discovering the city. There are, obviously, many more museums and galleries around Amsterdam (if you're interested, have a look at this website: http://www.iamsterdam.com/en-GB/experience/what-to-do/museums-and-galleries), but this two I mentioned above are probably the must-see ones (yes, I do feel very ashamed I haven't been to the Anna Frank museum yet....), and this is why I wrote that you can get a good feeling of what Amsterdam is in two days. 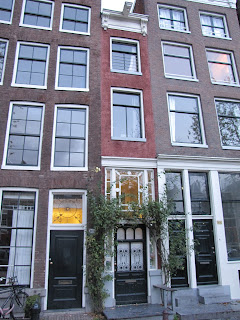 The "narrowest house in the world" on Singel 7

What should you do in the afternoons, then? Well, walk around! The street between the station and the main square is the most important one, with all the big shops and the McDonalds&co. Therefore, it's the less interesting! :P But, in between (to the left and to the right) there's a whole beautiful, typically Dutch city centre to discover. Wonderful canals (don't miss the narrowest house in the world on Singel 7 - although all houses around the canals are pretty narrow!), beautiful buildings and lots of weird stuff happening. When I was there with my friend, we first saw a place where guys could pee (you know, those public urinals that, by the way, you can find everywhere in the Netherlands), then the pee would be transported in a sort of container (which you could see......) and, from it, phosphorus would be taken.  Apparently there's a lot of phosphorus in our pee, and this can be used as natural fertiliser. Well, instructive! Then, a while later, we bumped into two guys who were singing and playing (one the trumpet and the other the guitar) on a boat in one of the canals, under a bridge. I can't stress this enough: just really walk around in Amsterdam, and weird things will come to you! 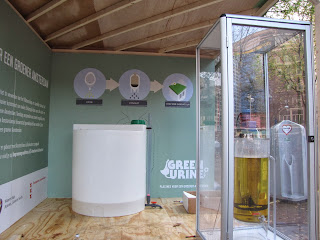 The Green Urine thing where they get phosphorus out of pee 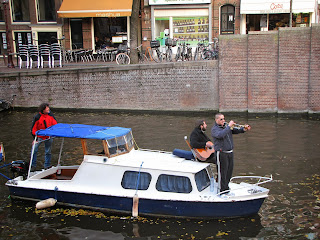 Lastly, take a stroll in the Vondelpark. It's huge and it has all kinds of things inside. Lakes, meadows, playgrounds, an open theatre, bars & restaurant, pieces of art scattered around, a self-managed lost&found thing ("thing" cause I don't know how to call it: it's like a panel where you can hang stuff that people have lost)...You name it!

Then comes the evening. If you're going during the winter, it becomes dark quite soon. At that time I generally head back to the city centre and really start wandering around the strangest part of the city. Go to the street named Nieuwendijk and you'll get what I mean. To be honest, you'll already have walked through it during the day, but it gets magical when it's dark. All the touristic shops that sell anything connected to smoking or to the red light districts are full of this sort of psychedelic lights and music, and I just love to go from one shop to another and get carried away by the good vibes (and the crowd of italians trying to get the best souvenirs for the friends that stayed at home). Then, if you're into it, do hop into a coffee shop. The Bulldog in Oudezijds Voorburgal (hope I spelled it correctly!), very near the old church, is the oldest one, and is a classic.

Then, after 8 or 9 it gets very interesting to walk around the small streets of the Red Light District. They are all around the Old Church (something I always found fascinating) and they are full of these sort of shop windows were women of literally all kinds smile and wink at the boys (some smile and wink at the girls too!). Now, there's a lot of arguments you could make about the District, but I feel like this is not the right post. ;) I do enjoy walking around there, trying to catch the guys when they are asking for prices or are just coming out of a window, or just enjoying the red-lit waters of the canals! 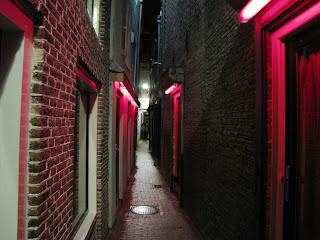 One of the streets of the Red Light District...as you might have guessed! ;)

Hope you find this information useful. If you do go to Amsterdam and have other questions just let me know :D

P.S.= You MUST try the chips they sell everywhere around the city centre. Make sure you go in one of the places that sell ONLY chips and get the largest portion...You might not be able to finish it, but it's worth it!!
Posted by Caterina M at 7:43 PM