The European Union seen from Brighton

One of the fields I'm most interested in is the European Union, a topic that is getting more and more interesting as the crisis goes on. It is also particularly interesting for me because I have the opportunity to see how two different nations (Italy and the United Kingdom) cope with it. That's one of the reasons I've recently started to engage with the notions of identity, in such a vast reality and diverse as the EU undoubtedly is.

Italian people are generally quite happy with the EU. No, they are not necessarily happy, but they acknowledge it as an important part of the identity. It's always been there, for better or for worse (and, generally, it's been for better, though not always). Italians ALWAYS complain, about everything, and they obviously complain about the EU, too. But they complain about it as a teenager would complain about his parents: they don't leave him the freedom he would like, but deep inside he still loves them and generally does what they say. A look at the Eurobarometers can easily show this inclination.

The UK, on the other hand, is the total opposite. British people not only dislike the EU for what they feel are its "impositions", but they don't even acknowledge being part of Europe. I know not all British are like this, but that's the feeling I get when talking to many of my fellow students, even those who study Politics with me. Speaking metaphorically again, it's a bit like the EU was a distant relative that has the habit of always come into your house and criticize you. Your parents keep telling you that you have to put up with him, so you do, but if it was for you'd lock him out of the house and never let him in again. It's really, really weird for me, because it's a conception of the EU that doesn't make sense.

What's the perception of the EU in your country, if you are from a EU country? Do you think the UK will ever feel European, or do you think they'll keep on feeling almost like another continent?

Posted by Caterina M at 7:41 PM No comments:

Have you ever been to a Japanese wedding?

As you know, I went to Japan and South Korea last year, in March/April. I had always wanted to go, so when my friend Keigo told me he was going to get married in Kyoto at the end of March, I thought...why not? The terrible earthquake and its consequences did not stop me, and it was totally worth it, since I had the chance to see a Japan completely emptied of tourists. For fear of radiations, though, I could only spend one day in Tokyo, instead of the 3 I had planned. I stayed in Osaka instead, further from Fukushima.

Anyway, my friends' wedding was reeeaally interesting. Ok, I didn't understand a word of what they said, but I'm sure it was all interesting! :P
I was obviously the only "Western" person, so everybody was being really kind. As it's generally unpolite to say "no" when they offer you a drink, I kept saying yes to the beer, the wine and the sake (a famous Japanese alcoholic drink)...Needless to say, the result was me starting to behave as a typical Italian girl who has had a few drinks: talking very loudly, laughing and drinking more. OOOPS!

I managed to take some pictures, though, and to follow the whole ceremony with attention, despite the alcohol. The bride, Risa (which you should actually read "Lisa" - you know how people from the far east find it difficult to pronounce our "r"s), had a beautiful dress and changed into an even more beautiful one around the middle of the afternoon. Give a look at them: 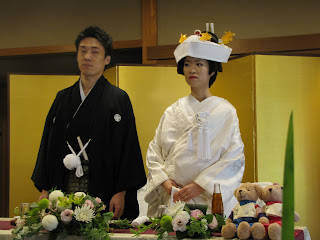 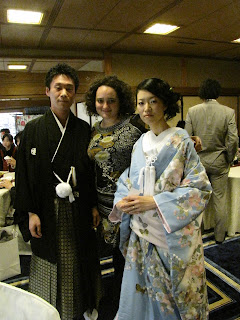 Me with the newly married couple ^^

The food was all typical, which was great for me. I didn't eat it all, though, either because it was too much or, sometimes, because it was raw fish with too many vegetables ( I hate veggies!). 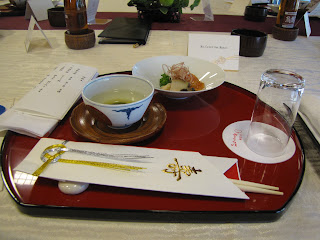 This is how the table was set at the beginning...luckily they had a fork and a knife for me! 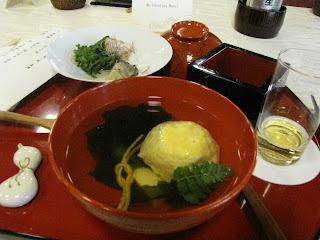 I remember this one! Miso soup maybe? Veeery nice anyway! ^_^

Nearly at the end of the ceremony, Keigo said a sentence in Italian, thanking me for being there. VERY nice of him, as I hadn't understood anything till then. :P I was sitting at a table with a Taiwanese couple (Ivan and Tiong Wan), though, so I could speak English with them.

Did you know that it's common, in Japanese weddings, to give the couple some money in an envelope, as wedding gifts? In Italy you generally give presents, often things that they'll need in their new house (although the habit is changing now that many couples live together before getting married). I personally brought typical Italian stuff, and I think it was appreciated...If you are going to a Japanese wedding, I recommend you do the same! Japanese people are generally very interested in other cultures. 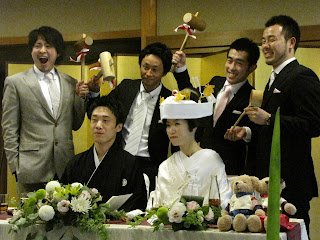 I'll leave you with this last wedding picture, with Keigo's friends, holding some hammers used during the ceremony. Actually, they even called me to use one of them at a certain point...you can immagine my surprise when I heard them calling my name, after a long speech in Japanese...It was fun anyway! XD

P.S.= The title is taken from Gogol Bordello's song "Have you ever been to an American wedding?". Gogol Bordello is my fav band...do listen to them if you have the chance!

Hi all!
Really sorry for not posting anything for aaages but I have been without internet connection for some period, then busy with the job and then again without internet connection. Now I'm here though! Moved into my new flat, got a chair (no other furniture yet, so I'm sleeping on an inflatable mattress) and finally got the internet! Who knew you have to do so many things when you move into a new flat by yourself??
One of the things I had to do was to ask Southern Water to put a meter in my flat. Did you know that most of the houses here don't have meters for their water? I think it's crazy. It's something that you NEVER see in Italy. Ok, it was useful for us last year because the un-metered bill was quite cheap since we were splitting it up among 6 people, but it does encourage waste, doesn't it? Southern Water says on its website that they've noticed that, by installing meters in the houses, people use 5% water less. THANK YOU! *ironic mode* Plus, it's not fair on people who don't live in that house at times (like me when I go back to Italy for the holidays).
Well, I've done most of what I to do now and I can relax a bit more, though University starts on Thursday. Last week I managed to spend some time in Cambridge with a Libyan friend of mine. He is from Benghazi so he has lived the revolution in person...we had so much to talk about! As you might know, I'm very interested in Middle Eastern politics and it's extremely interesting to see the point of view of someone who lives in another reality, with different medias from ours.
Maybe I'll write more of what we spoke about in another post, I've got to go now. Sitting on the floor to write on the laptop on the chair isn't that comfortable!
Bye :)
Kate
Posted by Caterina M at 9:07 PM No comments: